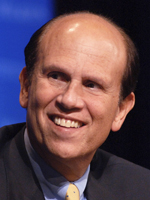 Mike Milken has been at the forefront of a wide range of initiatives that have influenced public policy, accelerated medical research and expanded access to capital. Fortune magazine called him "The Man Who Changed Medicine" for "shaking up the medical establishment and saving lives." He is chairman of the Milken Institute and FasterCures, founder of the Melanoma Research Alliance, and the inspiration behind several philanthropic initiatives worldwide. In 1982, Mike co-founded the Milken Family Foundation, which supports education reform and research on a wide range of life-threatening diseases. As a financier, he is often said to have revolutionized modern capital markets by expanding access to capital for more than 3,200 growing companies that created millions of jobs. He graduated with highest distinction from UC Berkeley and earned his M.B.A. at the Wharton School. Mike and his wife of 44 years, Lori, have three children and seven grandchildren. More details are at www.mikemilken.com.