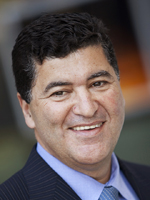 Elias Zerhouni is president for global research and development and a member of the Executive Committee for Sanofi. Before assuming this role, Zerhouni was a scientific advisor to the company and played an instrumental role in redesigning the Sanofi R&D model to foster increased innovation through scientific networks. At Johns Hopkins University and Hospital, he was professor of radiology and biomedical engineering. He served as director of the National Institutes of Health from 2002 to 2008. In that position he oversaw the NIH's 27 institutes and centers with more than 18,000 employees and a budget of $29.5 billion (2008). In November 2009, President Obama appointed Zerhouni as one of the first presidential science envoys. Zerhouni has founded or co-founded five startup companies, authored more than 200 publications and holds eight patents. He is a senior fellow of the Bill & Melinda Gates Foundation and a trustee of the Mayo Clinic. He is also a member of the Institute of Medicine of the U.S. National Academy of Sciences.