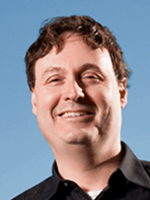 Jonathan Rothberg is the founder and CEO of Ion Torrent. He is best known for inventing high-speed, massively parallel DNA sequencing, also known as next-generation sequencing. He founded 454 Life Sciences in 1999, bringing to market the first new method for sequencing genomes since Sanger and Gilbert won the Nobel Prize in 1980. In 2007 he sequenced Nobel laureate James Watson's genome, the first individual or personal genome. That same year, Rothberg founded Ion Torrent, inventing a new sequencing technology that directly translated the language of chemistry into the binary language of computers, all on a novel semiconductor chip. The Ion Personal Genome Machine is now the fastest-selling sequencer in the world, and the Ion Proton sequencer, launching this quarter, is designed to break the $1,000 genome barrier, making human genome sequencing a routine part of medicine. Rothberg is the winner of the Connecticut Medal of Technology, a member of the National Academy of Engineering and a life trustee of Carnegie Mellon University.