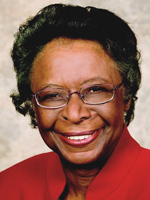 Cora Marrett is deputy director of the National Science Foundation. She has also served as NSF's acting director, acting deputy director and senior advisor. Previously, she was the foundation's assistant director for Education and Human Resources, leading the mission to achieve excellence in science, technology, engineering and mathematics (STEM) education at all levels. From 1992 to 1996, Marrett was the first assistant director for the Social, Behavioral and Economic Sciences directorate and earned NSF's Distinguished Service Award for her groundbreaking leadership. Prior to that, she was the University of Wisconsin System's senior vice president for academic affairs and served concurrently as professor of sociology at the University of Wisconsin-Madison. She is a fellow of the American Academy of Arts and Sciences and the American Association for the Advancement of Science. Marrett holds a B.A. from Virginia Union University, and an M.A. and Ph.D. from the University of Wisconsin-Madison, all in sociology.