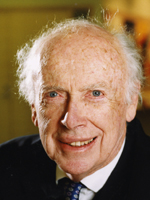 James Watson has served the Cold Spring Harbor Laboratory since 1968 as its director, president, chancellor and now chancellor emeritus. In 1953, while at Cambridge University, he and Francis Crick successfully proposed the double helical structure for DNA. They, together with Maurice Wilkins, were awarded the Nobel Prize in Physiology or Medicine in 1962. While a professor at Harvard, Watson commenced a writing career that generated "The Molecular Biology of the Gene" and "The Double Helix." He was a driving force behind the Human Genome Project that led to his receipt of the Copley Medal in 1993. Other awards are election to the National Academy of Sciences (1962), Medal of Freedom (1977), National Medal of Science (1997), City of Philadelphia Liberty Medal (2000), Benjamin Franklin Medal (2001) and Honorary Knight of the British Empire (2002). Watson was educated at the University of Chicago, where he received a B.S. in 1947, and Indiana University, where he earned a Ph.D. in zoology in 1950.