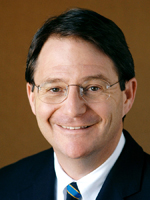 Jonathan Simons is the president, CEO and David H. Koch Chair of the Prostate Cancer Foundation, a position he has held since 2007. An internationally recognized prostate cancer oncologist, physician-scientist and biomedical inventor, he also served as interim chief science officer of the Melanoma Research Alliance during its launch by FasterCures in 2008. In 2000, Simons was recruited from the Johns Hopkins Cancer Center by Georgia Gov. Roy Barnes and the Woodruff Foundation of Atlanta to be the founding director of the Winship Cancer Institute at Emory University. Simons launched the first NCI Cancer Nanotechnology Centers at Emory and Georgia Tech in 2004. He is a graduate of Princeton University and the Johns Hopkins University School of Medicine, and did postgraduate fellowships at Cambridge University and Harvard Medical School.