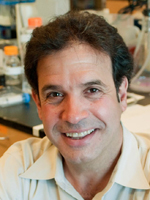 Rudolph Tanzi is the Joseph P. and Rose F. Kennedy professor of neurology at Harvard University and director of the Genetics and Aging Research Unit at Massachusetts General Hospital. Tanzi has been investigating the genetics of neurological disease since the 1980s. His research on the role of zinc and copper in Alzheimer's disease recently led to successful clinical trials at Prana Biotechnology. Tanzi serves on dozens of editorial and scientific advisory boards, and as chair of the Cure Alzheimer's Fund Research Consortium. Tanzi was included on the list of the "Harvard 100 Most Influential Alumni" and was chosen by the Geoffrey Beene Foundation as a "Rock Star of Science." He has co-authored over 400 research articles. He co-authored "Decoding Darkness: The Search for the Genetic Causes of Alzheimer's Disease" and is currently co-authoring a book with Deepak Chopra called "Super Brain." In musical pursuits, Tanzi professionally plays keyboards, most recently with Joe Perry, and for Aerosmith's upcoming album in fall 2012.

Alzheimer's and Other Issues of Aging