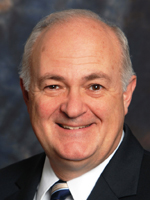 Steven Knapp is president of The George Washington University. His priorities include enhancing GWU's partnerships, expanding the scope of its research, strengthening its alumni community, enlarging students' opportunities for public service and leading its transformation into a model of urban sustainability. Previously Knapp taught English literature at the University of California, Berkeley, before serving as dean of arts and sciences and then provost of Johns Hopkins. He serves on many boards, including the Economic Club of Washington, Greater Washington Urban League, World Affairs Council-Washington, D.C., Washington National Cathedral Foundation and Al Akhawayan University in Ifrane, Morocco. He also sits on the senior advisory board of the Northern Virginia Technology Council and the executive committee of the Council on Competitiveness. He is a fellow of the American Academy of Arts and Sciences and a member of the Council on Foreign Relations and the Modern Language Association. He earned his Ph.D. and master's degree from Cornell University and his B.A. from Yale University.