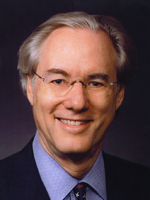 George Vradenburg is chairman of USAgainstAlzheimer's, which he co-founded, and the Geoffrey Beene Foundation-Alzheimer's Initiative, which are dedicated to public education, early diagnosis and finding a cure for the disease. Additionally, Vradenburg chairs the Phillips Collection art museum and serves as vice chairman of the Chesapeake Crescent Initiative, a public-private collaboration focused on life science, energy and security. He is also a member of the Council on Foreign Relations and the Economic Club of Washington. His "encore" vocation as an activist and philanthropist follows a distinguished career in law and media that included stints as general counsel at CBS and strategic advisor to AOL Time Warner, where he worked on policy issues involved in the development of the Internet. During his tenure at Latham & Watkins, he launched the entertainment and media practice group. Vradenburg received his B.A. from Oberlin College and his J.D. from Harvard Law.

Alzheimer's and Other Issues of Aging