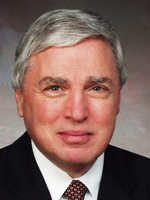 Andrew von Eschenbach is president of Samaritan Health Initiatives, Inc. and an adjunct professor at the University of Texas MD Anderson Cancer Center. He is also a former commissioner of the U.S. Food and Drug Administration and former director of the National Cancer Institute. During his tenure at the FDA, von Eschenbach set out to modernize the agency by improving the regulatory pathway for drugs and medical devices and fostering creative projects such as the Critical Path Initiative that brought today's tools of science to the product development process. At the NCI, he championed the acceleration and integration of the discovery-development-delivery continuum. Prior to his public service, he had a three-decade-long career as a renowned physician, surgeon, oncologist and medical executive, including executive vice president at the MD Anderson Cancer Center. In 2006 von Eschenbach was named one of Time's "100 Most Influential People," and in 2007 and 2008 he was selected as one of the "50 Most Powerful Physician Executives in Healthcare" by Modern Healthcare/Modern Physician.

The Coming Age of Precision Medicine