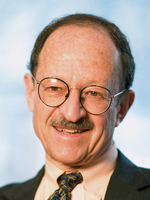 Harold Varmus, co-recipient of the Nobel Prize for studies of the genetic basis of cancer, is director of the National Cancer Institute. He took the position in 2010 after a decade as president of Memorial Sloan-Kettering Cancer Center and six years as director of the National Institutes of Health. He is a member of the National Academy of Sciences and the Institute of Medicine, and is involved in several initiatives to promote science and health in developing countries. The author of more than 350 scientific papers and five books, he recently published the memoir "The Art and Politics of Science." Varmus was a co-chairman of President Obama's Council of Advisors on Science and Technology, and co-founder and chairman of the board of the Public Library of Science. Varmus also chaired the Scientific Board of the Gates Foundation Grand Challenges in Global Health.