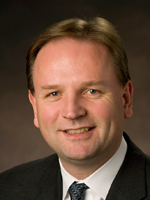 Simon Stevens is president of global health at UnitedHealth Group, which provides health and well-being services for 75 million people in over 50 countries. As executive vice president of UnitedHealth Group, Simon also oversees the company's Corporate Strategy Group and leads UnitedHealth's work on U.S. health reform and innovation. He serves as chairman of both the UnitedHealth Center for Health Reform and the Optum Institute. Simon was previously CEO of UnitedHealth's $30 billion Medicare company, and before that was British Prime Minister Tony Blair's health adviser. He has run hospitals, primary care, and payer/health commissioning organizations on both sides of the Atlantic, and has worked in Africa and South America. He is a non-executive director of a number of international health organizations and has been a visiting professor at the London School of Economics. Stevens was educated at Oxford University, Strathclyde University and Columbia University.

Who Pays for Treatment and Cures?