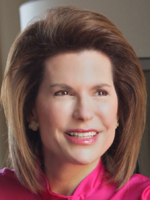 Nancy Brinker, a former U.S. ambassador to Hungary, is the founder and CEO of Susan G. Komen for the Cure. Brinker started Komen for the Cure in 1982 after promising her dying sister, Susan G. Komen, that she would do everything possible to battle breast cancer. The organization has since invested more than $1.9 billion in research, education, screening and treatment, and its activism has led to new legislation and greater government research funding. Brinker's creativity has led to revolutionary efforts such as Susan G. Komen Race for the Cure and cause-related marketing. In 2009, President Obama honored her with the Presidential Medal of Freedom, the nation's highest civilian honor. She was also named Goodwill Ambassador for Cancer Control for the United Nations' World Health Organization, where she continues working to put cancer control at the top of the world health agenda. The author of the best-seller "Promise Me," she was named one of Time's "100 Most Influential People" in 2008. A member of the Council on Foreign Relations, she has received numerous accolades for her work.