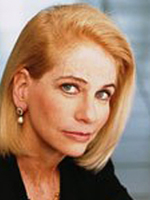 Judy Bachrach joined Vanity Fair as a contributing editor in 1995. She has profiled Judith Giuliani, disgraced congressmen Randy "Duke" Cunningham and Mark Foley, former Italian Prime Minister Silvio Berlusconi, Harold Ickes, Goldie Hawn and novelist Patricia Cornwell, among others. She has also produced features on some complicated topics: the decision to place Chile's much-hated former dictator Augusto Pinochet under house arrest near London, the brutal murder of Maurizio Gucci in Italy, and the attempt by a brilliant teenage boy to arrange his own suicide on the Internet (the latter article has been optioned for a film by director Bryan Singer). Prior to joining Vanity Fair, Bachrach was a political columnist with the Washington Star. She began her career as a TV critic at the Baltimore Sun and went on to write for the style section of the Washington Post for five years. Bachrach wrote "Tina and Harry Come to America: Tina Brown, Harry Evans, and the Uses of Power" (Free Press, 2001).

Uncovering the Mystery of the Brain