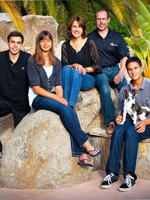 The Beery family - Joe, Retta and their children Zach, Noah and Alexis - is an example of a whole genome sequencing success story. Twins Noah and Alexis, who were diagnosed as toddlers with dopa-responsive dystonia, became mysteriously ill when they were 12. The mystery illness was solved by whole genome sequencing, which found both had a serotonin deficiency. The 16-year-old twins now appear on such programs as the "Today Show," "Good Morning America" and "NOVA," and at speaking engagements to bring hope to many suffering with rare and undiagnosed ailments. Joe Beery is chief information officer of Life Technologies, Inc. in Carlsbad, CA. Retta Beery is a patient advocate who runs a website and speaks around the world about the family's experience. The oldest sibling, Zach, attends the University of Michigan as a freshman.