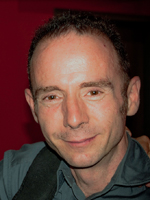 Timothy Brown is the founder of the Timothy Ray Brown Foundation of the World AIDS Institute. The foundation has a single goal: to find a cure for HIV. In 1995 Brown was diagnosed with HIV while attending school in Berlin. For the next 11 years, doctors treated him with anti-retroviral therapy. In 2006, however, he was diagnosed with acute myeloid leukemia and underwent chemotherapy. While the first round of treatment appeared to work, it also made him more susceptible to infections such as pneumonia and sepsis. His doctors realized they would have to try a different approach. His oncologist, Dr. Gero Hutter of the Charite Hospital in Berlin, opted to give Brown a stem cell transplant to treat his leukemia. But rather than choosing a matched donor, he used the stem cells of a donor who had what is known as a CCR5 mutation - a mutation that makes cells immune to HIV. In results later published in the New England Journal of Medicine, Hutter and his colleagues reported that the transplant not only treated Brown's leukemia but had also eliminated the HIV from his system.