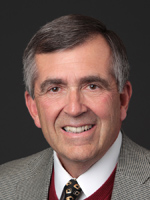 Peter Chiarelli is CEO of One Mind for Research and a retired U.S. Army general. An advocate for service members and veterans suffering with post-traumatic stress and traumatic brain injuries, Chiarelli and his nonprofit organization are focused on rapidly developing new treatments for brain disorders. Prior to joining One Mind for Research, he was the Army's vice chief of staff (2008-2012), overseeing the implementation of recommendations related to the Army's behavioral health activities, specifically the Health Promotion, Risk Reduction and Suicide Prevention program. Chiarelli also served as the senior military assistant to the secretary of defense (2007-2008). During the Iraq war, Chiarelli was responsible for the day-to-day combat operations of 147,000 U.S. and coalition troops and pioneered efforts to restore government services and economic stability. He holds a B.S. from Seattle University, an M.P.A. from the University of Washington and an M.A. in national security strategy from Salve Regina University.