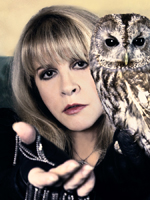 Stevie Nicks is the winner of multiple Grammy Awards and a Rock 'n Roll Hall of Fame inductee. Her extraordinary career as a solo artist, songwriter, live performer and member of Fleetwood Mac is legendary. Fleetwood Mac's "Rumours" is one of the best-selling albums of all time. Nicks penned such Fleetwood Mac classics as "Landslide," "Dreams," "Gold Dust Woman" and "Rhiannon." The five-time platinum album "Bella Donna" marked the debut of her solo career, which has produced such unforgettable singles as "Edge of Seventeen," "Leather and Lace" and "Stand Back." Nicks' new CD "In Your Dreams" debuted at No. 6 on the Billboard Top 200 Album Chart and has received glowing reviews. Us Weekly declared it the best album of the artist's four-decade career. Nicks is currently on her 2012 summer tour.