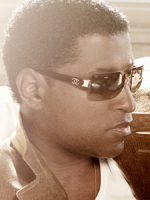 Kenny "Babyface" Edmonds is a music producer, songwriter and recording artist. A 10-time Grammy winner with 11 solo albums, Edmonds has been behind more than 125 Top 10 R&B and pop hits, with single and album sales exceeding 500 million units worldwide. Many celebrated vocalists have recorded his work, among them Whitney Houston, Madonna, Michael Jackson and Beyonce. He has been honored by the Soul Train Music Awards, the NAACP Image Awards and the American Music Awards, and was named Entertainer of the Year by Black Entertainment Television. Edmonds' charitable work has likewise earned wide recognition. He has received the Essence Award for Excellence, the City of Hope Award and Variety magazine's Top of the Town Honoree Award for his efforts. He was national spokesman for Boarder Babies and helped fund a transitional home for youths, the Little Blue House in Washington, D.C. With Antonio "L.A." Reid, Edmonds wrote and produced the song "Just Stand Up" to promote breast cancer awareness. They were honored at the Noble Awards for their contributions to Stand Up to Cancer.