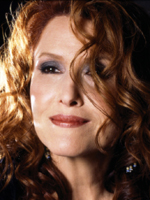 Melissa Manchester is a Grammy Award-winning singer and songwriter. From the clubs of Greenwich Village and the jingles circuit, she went on to headline Carnegie Hall and Radio City Music Hall, and her compositions have been recorded by Barbra Streisand, Alison Krauss, Roberta Flack, Johnny Mathis and many others. Among her biggest hits are "Through the Eyes of Love" and "Don't Cry Out Loud." Manchester was nominated for the Grammy in 1978 and 1979, receiving best female vocalist honors in 1982. She was the first artist in Academy Awards history to have two movie themes nominated in one year: "Through the Eyes of Love" and "The Promise" in 1980. As an actor, Manchester has starred on stage in Andrew Lloyd Webber's "Song and Dance" and Stephen Sondheim's "Sweeney Todd," and she has also been featured in film and television. The celebrated singer has received the Governor's Award from the National Academy of Recording Arts and Sciences and recently won the New York Bistro Award, presented to her by the late Marvin Hamlisch.