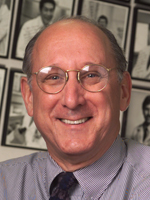 Steven Rosenberg is chief of surgery at the National Cancer Institute and a professor of surgery at the Uniformed Services University of Health Sciences and the George Washington University School of Medicine and Health Sciences. As the developer of the first effective immunotherapies and gene therapies for advanced cancer, Rosenberg has produced studies of cell transfer immunotherapy that have resulted in durable, complete remissions in patients with metastatic melanoma. He was the first to successfully insert foreign genes into humans, and his recent studies of the adoptive transfer of genetically modified lymphocytes resulted in the regression of metastatic cancer in patients with melanoma, sarcomas and lymphomas. After completing his residency in surgery in 1974, Rosenberg became chief of surgery at the NCI, a position he still holds. He received his B.A. and M.D. at Johns Hopkins University and a Ph.D. in biophysics at Harvard University.

Advances Against the Crafty Cancer Cell