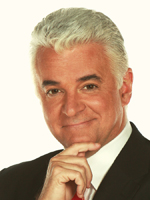 John O'Hurley won a Screen Actors Guild Award for his portrayal of the iconic J. Peterman on "Seinfeld," which has become the top-rated syndicated television show in the world. He hosted the popular game shows "Family Feud" and "To Tell The Truth" and is the perennial host of the "National Dog Show" on Thanksgiving Day. O'Hurley was the ultimate champion on the first season of the runaway hit "Dancing With the Stars." A New York Times-bestselling author with two titles to his credit, he is also a Billboard chart-topping composer in the classical alternative genre, with more than 20 compositions. O'Hurley received the Ellis Island Medal of Honor in 2011 for his philanthropic efforts with his many charities. He co-founded the waste-to-energy company Energy-Inc. and is a partner in the original J. Peterman Co., the clothing catalog company on which his "Seinfeld" character was based.