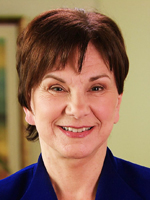 Janet Woodcock is the director of the Center for Drug Evaluation and Research at the Food and Drug Administration. At the FDA, she introduced the concept of pharmaceutical risk management in 2000 as a new approach to drug safety. Since 2002, she has led the Pharmaceutical Quality for the 21st Century Initiative, an effort to modernize drug manufacturing and its regulation. In 2004, she introduced the FDA's Critical Path Initiative, designed to improve the scientific basis for medical product development. Woodcock's honors include a Presidential Rank Meritorious Executive Award, the Nathan Davis Award from the American Medical Association (1999), the Roger W. Jones Award for Executive Leadership from American University (2000) and the Public Health Leadership Award (2004) from the National Organization for Rare Disorders. She has authored over 60 publications. Woodcock holds an undergraduate degree from Bucknell University and an M.D. from Northwestern University Medical School. She has taught at Pennsylvania State University and the University of California, San Francisco.