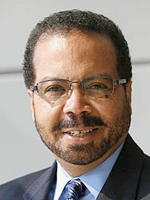 Roderic Pettigrew is the first director of the National Institute of Biomedical Imaging and Bioengineering at the National Institutes of Health. Prior to that appointment, he was professor of radiology at Emory University and bioengineering at the Georgia Institute of Technology. Pettigrew is known for his pioneering work at Emory involving four-dimensional cardiovascular imaging using magnetic resonance, or MRI. Pettigrew's awards include membership in Phi Beta Kappa, the Bennie (Benjamin E. Mays) Award for Achievement and most distinguished alumnus of the University of Miami in 1990. He has been honored with the Association of Black Cardiologists Nickens Award, the Distinguished Achievement Award of the Biomedical Engineering Society and the Distinguished Service Award of the National Medical Association. He was elected to the Institute of Medicine and the National Academy of Engineering. Pettigrew received a B.S. from Morehouse College, an M.S. from Rensselaer Polytechnic and a Ph.D. from MIT. Subsequently, he earned his M.D. at the University of Miami.