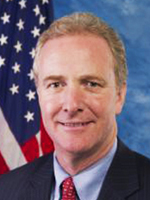 Chris Van Hollen has represented Maryland's 8th District in the U.S. House of Representatives since 2002. He became one of the youngest members of the Democratic leadership in 2008. In addition to serving in House leadership, Van Hollen was elected by his colleagues in 2010 to serve as the top Democrat on the House Budget Committee, where he works to advance policies that support job creation and economic growth, reduce the deficit, and put America on a path to long-term fiscal sustainability. Throughout his career, Van Hollen has been a champion of education, energy, the environment, health care and civil rights. A leader in cleaning up the Chesapeake Bay, he fought successfully to obtain a historic boost in federal funds for the Bay as part of the Farm Bill and to secure provisions in the Recovery Act that provided loan guarantees for renewable energy projects. He also played an integral role in the effort to pass comprehensive health-care reform and fought to ensure that young adults receive expanded access to health insurance.