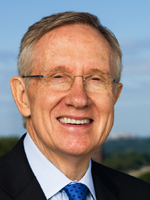 Harry Reid is the majority leader in the U.S. Senate and the senior senator from Nevada. Born in the small rural mining town of Searchlight, Reid graduated from Utah State University in 1961 and went on to receive a law degree from George Washington University. After completing law school, Harry served as the city attorney in Henderson, and then as an assemblyman in the Nevada State Assembly in 1968, at age 28. In 1970, he became the youngest lieutenant governor in Nevada history and was later appointed chairman of the Nevada Gaming Commission, where for five years he fought to clean up Nevada's gaming industry. Reid served two terms in the U.S. House of Representatives. He was elected to the Senate in 1986, and re-elected in 1992, 1998, 2004 and 2010. Reid served as the chairman or senior Democratic member on several important committees and subcommittees.