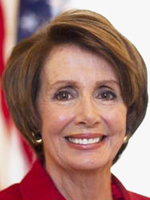 Nancy Pelosi is the Democratic leader of the House of Representatives and the speaker of the House from 2007 to 2011. She is the first woman in U.S. history to lead a major political party in Congress, having initially served as House Democratic leader from 2003 to 2007. Pelosi has represented California's 8th District (San Francisco) for 25 years. She brings to her leadership position a distinguished record of legislative accomplishment. She led the Congress in passing historic health insurance reform, key investments in college aid, clean energy and innovation, and initiatives to help small businesses and veterans. From a strong family tradition of public service in Baltimore, Pelosi has been a powerful voice for civil rights and human rights for decades around the world.