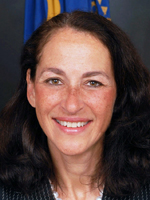 Margaret Hamburg is commissioner of the U.S. Food and Drug Administration (FDA), where she has served since May 2009. As FDA commissioner, she is advancing regulatory science, medical product innovation and globalization of the agency, while overseeing the implementation of groundbreaking laws to curb the use of tobacco and enhance food safety. She has undertaken major efforts to streamline and modernize the FDA's regulatory pathways. Before joining the FDA, Hamburg was vice president and senior scientist at the Nuclear Threat Initiative. In the 1990s, as New York City's health commissioner, she launched several major initiatives, including the nation's first public health bioterrorism preparedness program and an internationally recognized program to curtail the resurgence and spread of tuberculosis. President Clinton later named her assistant secretary for planning and evaluation in the U.S. Department of Health and Human Services. Hamburg earned her M.D. from Harvard Medical School.

The FDA: Past, Present and Future