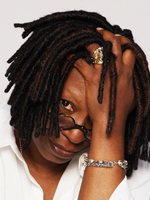 Whoopi Goldberg, one of America's most popular actors, has won a Grammy, an Academy Award, two Golden Globes, an Emmy, a Daytime Emmy and a Tony. A UNICEF Goodwill Ambassador to the United Nations, she is also an outspoken humanitarian activist, working on behalf of children, the homeless, the battle against AIDS and many other causes. Her long career in film has been highlighted by "The Color Purple," "Sister Act," "Ghost," "Corrina, Corrina," "The Lion King" and "For Colored Girls." On television, among other credits, she has appeared in "Star Trek: The Next Generation," hosted a syndicated late-night talk show and starred in the NBC sitcom "Whoopi," which she executive produced. Currently, she is a host of ABC's "The View." Goldberg has penned numerous books for children and adults, and her second work, "Book," achieved bestseller status. Goldberg's hands, feet and braids are imprinted in the forecourt of Grauman's Chinese Theatre, and she was honored with a star on the Hollywood Walk of Fame.