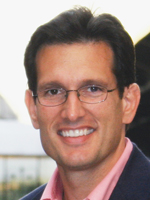 Eric Cantor is the majority leader in the U.S. House of Representatives and has been Virginia's 7th District congressman since 2001. Elected majority leader in the wake of the 2010 midterm elections, Cantor was previously the Republican whip. Named one of The Weekly Standard's "Young Guns of the House GOP," he is a co-author of the New York Times best-seller "Young Guns: A New Generation of Conservative Leaders." His commentary on the economy, health care and foreign policy has been featured in many major publications. A proponent of strong national defense, Cantor formerly chaired the Congressional Task Force on Terrorism and Unconventional Warfare. He has worked to lower taxes, eliminate excessive regulation and encourage entrepreneurship, and authored the Tax Relief and Health Care Act of 2006, which made it easier for families to save for health-care needs through health savings accounts. Cantor holds a bachelor's degree from George Washington University, a J.D. from William & Mary and a master's degree from Columbia University.