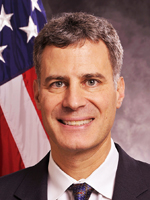 Alan Krueger is the chairman of President Obama's Council of Economic Advisers, confirmed by the Senate in November 2011. A labor economist, Krueger has published widely on unemployment, the economics of education, income distribution, social insurance, regulation, terrorism, finance and the environment. He has been a research associate of the National Bureau of Economic Research, a member of the editorial board of Science and chief economist for the Council for Economic Education. He is the author of "What Makes a Terrorist: Economics and the Roots of Terrorism" and "Education Matters: A Selection of Essays on Education," and co-author of "Myth and Measurement: The New Economics of the Minimum Wage" and of Inequality in America: What Role for Human Capital Policies?" Before assuming his current position, Krueger was a member of the board of the MacArthur Foundation and a senior scientist for the Gallup Organization. He holds a bachelor's degree from Cornell University, and a master's and a Ph.D. in economics from Harvard University.