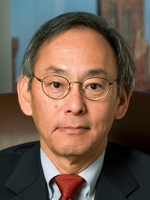 Steven Chu is the U.S. secretary of energy, charged with helping implement President Obama's plans to invest in clean energy, reduce U.S. dependence on foreign oil and address the global climate crisis. Chu is the co-recipient of the 1997 Nobel Prize for Physics and many other awards. He has devoted his recent scientific career to the search for solutions to our energy and climate challenges - a mission he continues with even greater urgency as the secretary of energy. Prior to being appointed secretary, Chu was the director of the Department of Energy's Lawrence Berkeley National Lab, where he led the lab in pursuit of alternative and renewable energy technologies. He also taught at the University of California as a professor of physics, molecular biology and cell biology. Previously, he held positions at Stanford University and AT&T Bell Laboratories. Chu is a member of the National Academy of Sciences. He holds bachelor's degrees in mathematics and physics from the University of Rochester and a Ph.D. in physics from the University of California, Berkeley, as well as 23 honorary degrees.